Hello everyone and anyone who is still subscribed to me here or perhaps has happened upon this blog through Pinterest.

I apologize for the much longer hiatus than I had predicted back in 2012.  After taking that break over the summer, I could not find the motivation to get back into it.  Finding two new eco-challenges each week to change, implement, photograph, and write about was getting to be frustrating for me.

However I am very excited to announce that I am now blogging again at a new web address.  My new blog will continue to be about very eco-friendly, natural, healthy topics with lots of do it yourself posts.  It's also going to expand to be a little more personal and open up the lines for me to talk about other areas of life that I'm passionate about such as ethical practices, living simply, mindfulness, social causes, and living on a budget.

I'm using a new platform, but you can still subscribe or just check in on your own as you wish.  I'm feeling enthusiastic about this new venture, and I hope you will join me!  You can hop on over to the new site here: 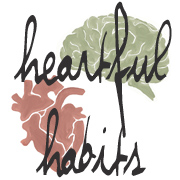 Posted by GraceYves at 2:09 PM 4 comments

A Blog to Remember

It's another long weekend here for us in Canada.  Happy Canada Day!  Normally I don't post on holidays, but today I have an announcement.  Lately I've been finding it harder to get my posts written about new and interesting things twice a week each week.  Now with summer here, I am thinking it is going to get even busier.  For this reason, I am going to be taking a bit of a hiatus from The Wife Life.  I will no longer be posting new material through the summer.  Come September I will see where I'm at and even where you are all at too.  Though I won't be posting anymore, I hope you will still come back for reference on different recipes, remedies, and everything else we've discussed over the last year a half.  Here are the most popular posts to get you started:

I appreciate each one of you who have been reading and especially commenting.  It means so much to me.  I wish you all the best on your journeys towards ever increasingly more natural, healthy, eco-friendly lives.

I'd love to end off by hearing what your favourite post has been.

Thank you!
Posted by GraceYves at 9:14 AM 2 comments

After my sister told me about arnica, and I found it in an ointment for 50% off at Saje, I knew I had to try it.  Arnica Rescue is an acute injury ointment.  It is 100% natural and contains only arnica montana flower, olive oil, and beeswax.

Arnica is a homeopathic remedy used for swelling, bruises, sprains, breaks, soft tissue, tendon, and muscular damage.  It alleviates swelling and reduces healing time.  It has been used and recommended by homeopaths for more than 200 years and is also frequently used by professional athletes.

I am currently using it on my bruised and swollen calf from white water rafting.  Using it as quickly as possible after the injury is ideal, and it has already done wonders for the swelling in my leg.  My first use for it though was much more interesting.  I have prepatellar bursitis in my knee.  This means my bursa (tiny fluid filled sac) on my knee is inflamed which causes severe pain when any pressure is applied to the area (at its worst for me, even the weight of my pants touching my knee causes pain).  The doctor didn't have any treatment options for me other than taking about 2,500 mg of ibuprofen a day and using a prescription anti-inflammatory cream.  I avoid pills and prescriptions unless really necessary, so I opted for my Arnica Rescue along with some ice.  The arnica ointment  has really worked well in relieving the inflammation as well as speeding up my healing time.

What do you use to relieve swelling?
Posted by GraceYves at 7:45 AM 5 comments

Brad and I used to be big cereal eaters until we learned that it's actually not so good for you.  As an adult I avoided high sugar cereals, choosing boxes that boasted of whole grains and high fibre.  I think pretty well everyone knows that Lucky Charms isn't the best option, but it turns out that even the "healthy" cereals like Vector or Special K, aren't good options either.  Commercial cereals are put through high heat, high pressure processes which strip the grains of most nutritional value they had.  It also destroys the structure of the amino acids which leaves them potentially harmful to our bodies.  Even the fortified cereals are pretty well useless, nutritionally speaking, because the vitamins added are man made.  The body treats many of these odd "vitamins" as toxins and eliminates them as quickly as possible.

Making granola is something that I have been wanting to do for a long time ever since I learned all this.  We've been buying muesli in place of cereal, but I knew it had to be overpriced compared to making it at home.  I always had it in my head that making granola would be some long, complicated process, so I put it off.  Well, I finally did it, and it was so easy!  This recipe has my own alterations from a recipe at Earthbound Farm's website.  You can add or remove any grains, seeds, nuts, and dried fruit as you like. 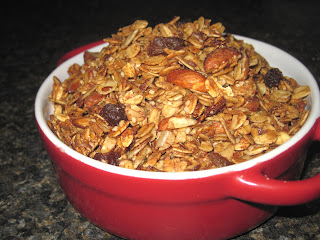 1. Preheat oven to 325 F.
2. Place oats, sunflower seeds, almonds, flax seeds, hemp seeds, and cinnamon in a large bowl.  Stir.
3. Add syrup and oil.  Stir until moistened.
5. Spread mixture on a rimmed baking sheet.
6. Bake for about 25 min until begins to brown.  Take out and stir.
7. Bake another 15 to 20 minutes until golden brown and dry.  Take out and stir.
8. Put the baking sheet on a cooling rack.  Add the raisins and stir.  Allow to cool.

We both really like this granola. We eat it just with milk (rice milk) in place of cereal for breakfast.  It's cheaper than buying muesli or granola in the store, and tastes way better than the store bought stuff too.  This size recipe lasted us about a month eating it 5 days a week each.  It's so simple to replace different seeds, nuts, etc to change it up sometimes too.  It would also be good served as a topping on different foods such as yogurt.


Have you made your own granola?  What do you eat for a healthy breakfast?
Posted by GraceYves at 8:13 AM 5 comments

Baking soda has so many uses.  This weekend we tried out a new one to us.  Cleaning the mattress!  I have pretty bad allergies, so I am always somewhat concerned about dust especially in our bedroom (though most of the time not concerned enough to do much about it).  Our mattress is ooold.  It's the mattress I grew up sleeping on and brought along when we got married.  Since in bed is where I spend 8-10 hours a day, I decided it was high time to clean it and found a natural way to do so. 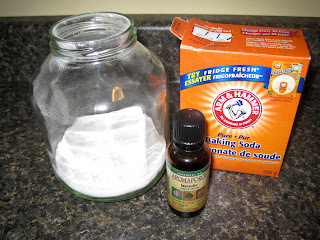 I've moved to a new website! Head on over to Heartful Habits for the natural mattress cleaner recipe. Thanks!
Posted by GraceYves at 8:19 AM 90 comments

I just discovered a new (to me) online marketplace that really piqued my interest.  It's called Ethical Ocean.  It does require you to sign up, though it is simple.  After signing up, you're asking to invite 2 friends to join as well, and this is my invitation to all of you.

To get a better idea of what the organization is all about, from their website, here is Ethical Ocean's vision:


Our purchasing decisions affect our society and the planet.
It’s up to each of us to know what we are buying and why—and how each product we spend our dollars on impacts other people, animals, and the environment.
But that doesn’t mean we have to know everything. We can share our knowledge, and ideas, to help one another choose wisely. That’s what Ethical Ocean is all about.

I love it.  To cultivate this vision, every seller and item on their website must qualify for at least one of three designations: Good for People, Good for Animals or Good for the Environment.  At present, they list more than 2300 products on sale from 210 ethical vendors and producers.  They have items in all the categories of fashion, health and beauty, kids and babies, electronics, home and garden, food and drink, and "everything else."  I was especially impressed to see an electronics section, as I know that they are a large problem area.

If this has piqued your interest as well, I encourage you to check them out here.

Where do you find ethically made and sold products?
Posted by GraceYves at 8:51 AM 0 comments

I have become quite adept at picking out fruit that is still good from the day old or discount section of the grocery store.  I get fruit from there then cut it up and freeze it or use it quickly for juicing (hey, juicing is another good idea for a future post).  For half price!  I get a rush when I get blackberries for a deal this way.  Last time I picked up 2 lbs of strawberries, but we already had plenty of frozen strawberries.  Wanting to try something new, I decided we should dehydrate them.  We don't have a dehydrater, so this is an in the oven method.

1. Quarter strawberries.  Spread out on a baking sheet.
2. Dry in oven at 210° F for 3 hours.  Leave oven door slightly ajar for the last hour. 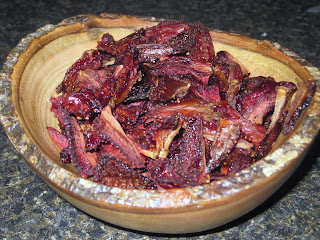 They're not much to look at, but they taste amazing!

Soon after making these we went with a group of friends on a 24 km biking trail, and (along with other food) these were such a fantastic snack to bring because they are easy to eat on the go and share around.  Everyone agreed they are tasty.  These dried strawberries are chewy and sweet with a strong strawberry flavour.  Dried fruit of all kinds pack a big punch in a little package as well being high in fibre and nutrient dense.  I love to snack on these.

Have you ever dried your own fruit?

*Note:
I'm now using a new platform, but you can still subscribe or just check in on your own as you wish.  I'm feeling enthusiastic about this new venture, and I hope you will join me!  You can hop on over to the new site here:

Posted by GraceYves at 8:16 AM 3 comments 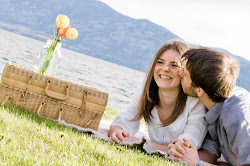 A Million Miles in a Thousand Years: What I Learned While Editing My Life
by Donald Miller

Harry Potter and the Deathly Hallows
by J.K. Rowling